This cap is suitable for cans with a DIN51...

The detaupeur is a pyrotechnic trap...

Duracool 12a gas is an environmentally...

What tomatoes to plant?

Kikuyu turf: how and when to sow this Spanish turf?

How and where to plant red sage?

Hydroalcoholic gel: which one to choose for your business?

This is one of the elements that allows refrigerators to function, among other things: refrigerant. You are told exactly what it is and what it is for.

Refrigerant: what is it?

A refrigerant is a gas that allows the implementation of a refrigeration cycle. What is counter-intuitive is that despite its name - we don't know about you, but we automatically think of a cold component - this fluid makes both cold and hotproduction systems work.

How does it actually work?

Refrigerant, refrigeration cycle... It's all very well, but for non-connoisseurs, it's still a bit of a vague concept. In detail, it can be said that it is a fluid or several mixed fluids, whether liquid, gaseous or both, and whose common point is to have physical peculiarities allowing them to produce heat or cold - depending on the stage of the cycle.

In practice, the refrigeration cycle that uses a refrigerant breaks down into four elements:

What are refrigerants made of?

In general, refrigerant fluids are composed of carbon, hydrogen, fluorine and chlorine atoms, which form the CHF formula. On closer look, there are several large families of refrigerants, including:

We grant you, reading is once again a bit of gibberish ... But what is important to remember is not the names of the various refrigerants that have been used so far.

Indeed, some of them, such as CFCs or HCFCs, have been banned because they are too toxic to the ozone layer or too much to accentuate the greenhouse effect. Instead, remember that there is generally no "better refrigerant" but fluids more or less suitable for this or that use.

Overall, ammonia is known to be a hazard because of its high corrosiveness, that hydrocarbons have the disadvantage of being flammable, or that CO2 only operates at extremely high temperatures. Therefore, we consider that there is not really a perfect refrigerant, and that it is all a question of balancing thermodynamicproperties, refrigeration power, pressure level, action on the ozone layer and contribution to the greenhouse effect... And more criteria!

If you have a car with air conditioning, you have probably already faced this problem: sometimes you have to recharge the circuit with refrigerant gas, because it has suffered small leaks due to the functional wear of the internal pipes and the cooling has become less efficient over time.

Don't panic: among the products referenced on Multitanks, you will find a complete recharging kit including a Duracool 12a canister, a natural refrigerant gas harmless to the ozone layer that you will find in the 170 g can format and in other containers suitable for different uses.

In addition, other products such as the Duracool Duradry - whichremoves moisture from your air conditioning system before using the Duracool 12a - are also available so that you have everything you need to maintain your refrigeration systems...

Find our eco-friendly refrigerants and discover our range Duracool on multitanks.com! 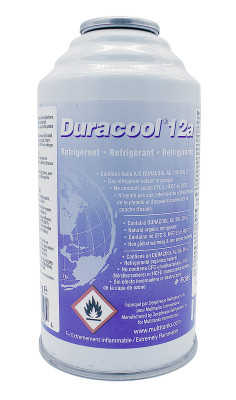 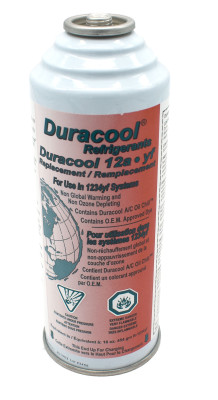