Everything you need to know how to load cans Duracool 12a 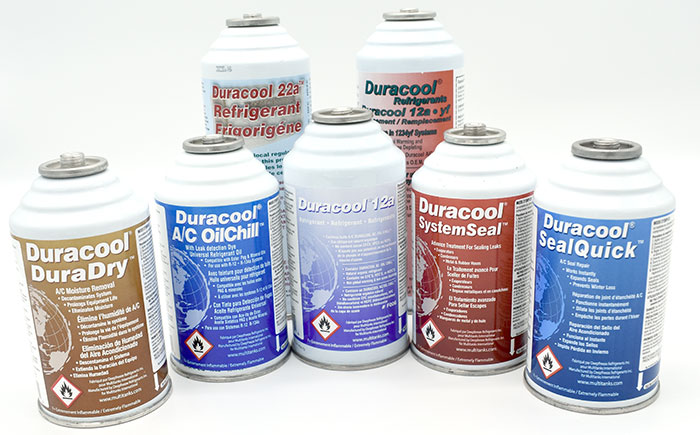 The Duracool : what exactly is it?

The Duracool is an hydrocarbon-based refrigerant gas (propane and isobutane). It replaces some of the refrigerant gases used in cold production systems (refrigeration and air conditioning). Specifically:

How do I know how much Duracool you need?

Namely, to replace these 3 gases (r12, r134a, 1234 yf), it will always take less duracool 12a because the molecules of this gas are larger, it will take less for an equivalent volume.

There is a ratio to calculate the amount of duracool 12a needed compared to other gases, useful to know the amount of gas to order:


The cans of duracool 12a contain 170grs of gas. So taking the first example, for 240grs of duracool you would have to buy 2 cans but load only part of the second can, assuming that the circuit is completely empty.

The Duracool 12a is a flammable liquefied gas, so it is strongly advised to follow the following safety measures:

We advise you to read all the use and safety instuctions shown on the can.


What tools can be used to load cans?

- To be able to charge a can, you will have to use a recharging hose, equipped on one side of a self-piercing faucet and on the other the connection R134, R12 or 1234yf, depending on the gas that equips your air conditioning system. Our DC402 hose, for example, is equipped with the R12 and R134a fittings as standard, and an optional HFO 1234yf can also be fitted with it.

We always recommend using the pipes we offer for sale (DC402 and DC3000 ), as they are certified 100% compatible with our cans. It is possible to find much cheaper hoses on the market mainly from China, but many customer returns have informed us that these hoses have the tendency to damage the threading of cans, making the can either unusable, or preventing the loading of it or causing leaks.

How to recharge the duracool 12a .

The Duracool range also includes other products that come in the form of cans or not. Here is the presentation of these:

Namely, all these cans contain a small amount of gas Duracool 12a to re-start a compressor that would be safe. If you inject several of these cans, you may not need to load a can of gas last. Use the pressures to avoid being overpressurized!

The cans of Duradry, Sealquick and Systemseal take over first. It is then very important to let the engine run for half an hour, either in slow motion or while walking with the vehicle, so that the product spreads and acts properly.